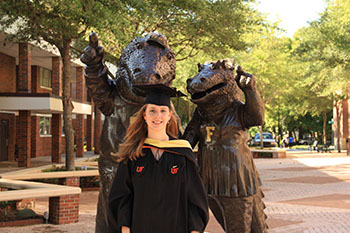 Ph.D. student, Department of Wildlife Ecology and Conservation with a Concentration in Tropical Conservation and Development..  Master's in Interdisciplinary Ecology from the University of Florida. Bachelor’s in Biology from Universidad Nacional de Asunción, Paraguay.

Vivi is a biologist from Paraguay, graduated from the Universidad Nacional de Asunción in 2010. In 2013 Vivi was awarded with the Fulbright scholarship from her home country to pursue a Masters degree and she joined the Molecular Ecology Lab at University of Florida working with Dr James Austin. Her masters research focused on small mammals (rodent) dispersal in sub-Saharan Africa, where she worked in Swaziland at the Savannah Research Centre. During her Masters, Vivi was part of the Southern Cone Conservation Leadership Initiative which set the ground for the establishment of the Southern Cone Chapter of the Society for Conservation Biology. In 2015, Vivi returned to her country and started working in several conservation projects led by a national NGO and soon after she became the Species Conservation Program Coordinator, working and collaborating throughout Paraguay and with other countries. These experiences shaped Vivi's interests and she decided to come back to UF, this time after being awarded the scholarship BECAL Paraguay, as well as WEC and TCD scholarships to pursue her PhD in Wildlife Ecology and Conservation with a concentration in Tropical Conservation and Development. She is now looking forward to incorporating more interdisciplinary approaches to link her research to conservation practice and decision making. She will be working in the Paraguayan Chaco forest, a deforestation hot-spot, looking to better understand medium and large mammals interactions, their role in shaping the ecosystem and use this information to inform decision making in this human-wildlife system. Vivi will be advised by Dr. Vanessa Hull and become part of the Global Human-Wildlife interactions Lab, and co-advised by Dr Lyn Branch.

Ph.D. student, School of Natural Resources and Environment and Department of Wildlife Ecology and Conservation. Concentration in Tropical Conservation and Development.
Bachelor's in Biology from Northern Arizona University

Prior to coming to the University of Florida, Nick lived for three years as a Peace Corps Volunteer in Paraguay working with small rural communities and with World Wildlife Fund at the national level. This led him to an interest in habitat connectivity in the highly fragmented landscapes that now dominate southern Paraguay. The Atlantic Forest, which is  one of the world’s top five “hottest” biodiversity hotspots, once covered ~30% of Paraguay, but, in the last 30 years , has been deforested by greater than 90%.  Restoration and preservation of habitat connectivity in the Atlantic Forest is a key priority for local and international conservation organizations in Paraguay, but design of connected landscapes is severely limited by lack of knowledge about wildlife movements and by lack of understanding of how to engage local landowners in maintaining or restoring landscape connections. Nick’s research will measure how wildlife respond to patterns of fragmentation and move through the landscape and aid environmental organizations in prioritizing areas for conservation and designing restoration strategies with long-term benefits for wildlife. Currently  Nick is supported by a National Science Foundation Graduate Research Fellowship. 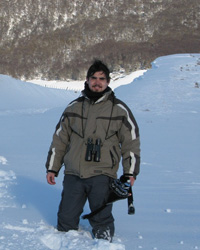 Claudio's research integrates social and ecological dimensions in wildlife research as a basis for biodiversity conservation. His early experiences in basic ecological research in agricultural and silvicultural settings, as well as his conservation and ecological work for the Wildlife Conservation Society-Chile Program in Tierra del Fuego, inspired him to look for an integrative way of filling the gap between theoretical conservation science and its practice in the field in Chile. He currently is enrolled in the Interdisciplinary Ecology PhD program at UF supported by a BecasChile scholarship for international doctoral studies from CONICYT. For his doctoral research, he intends to extend his previous research by evaluating conflicts between local economic activities (sheep farming) and guanaco (Lama guanicoe) conservation in Tierra del Fuego. He will explore how different stakeholders perceive the guanaco and ecological factors that influence the potential conflict between the guanaco population and economic exploitation of rangelands and forests. His research aims to promote wildlife conservation within the production landscapes of Tierra del Fuego. 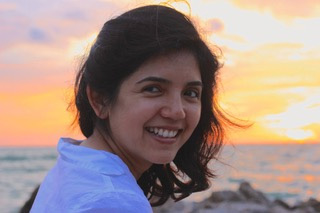 Ph.D. candidate, School of Natural Resources and Environment and Department of Wildlife Ecology and Conservation. Concentration in the Forest Resources and Conservation. Master's in Interdisciplinary Ecology from the University of Florida with a Concentration in Food and Resource Economics. Bachelor's in Business Administration from the National University of Salta, Argentina.

Prior to beginning her studies in Interdisciplinary Ecology and Natural Resources, Cristina completed a degree in business administration and worked in a bank in Argentina for six years. This experience serves as an important foundation for her interest in involving the private sector and economic tools in conservation solutions. Cristina’s research focuses on an existing payments for ecosystem services (PES) program in the Chaco forest, Argentina. The Chaco forest forms part of the Gran Chaco, which covers parts of Bolivia, Paraguay, Argentina and Brazil. It is the second largest forested ecoregion in the Americas and has among the highest rates of deforestation in the world. In 2007, the Argentine government implemented a PES program to combat the rapid conversion of the Chaco forest to agriculture. In theory, PES should result in the protection of habitat on private lands that would attain long-term persistence of biodiversity and provision of essential ecosystem services (e.g. carbon storage). In practice, PES often provide insufficient payments to prevent land conversion to higher-value uses like intensive agriculture and fail to incorporate spatial planning to prevent enrollment patterns that result in fragmented landscapes. Cristina’s project will combine economic techniques and spatial analysis to determine how different incentive-based tools might persuade landowners to maintain forest on their lands, rather than convert lands to soy or other alternatives. Using geographic information system (GIS) databases, she will identify which properties should be enrolled in PES to attain protection of contiguous forested land. She will also survey owners of these lands to determine whether they would enroll in PES or if they would prefer alternative conservation incentives, and the amount of compensation needed to keep native forest on these lands. Cristina is supported by the School of Natural Resources and Environment, the Department of Wildlife Ecology and Conservation, and the Tropical Conservation and Development Program at University of Florida. She is jointly advised by Drs. Elizabeth Pienaar and Lyn Branch.

Ph.D. (graduated), School of Natural Resources and Environment and Department of Wildlife Ecology and Conservation. Concentration in Tropical Conservation and Development. Master's in Interdisciplinary Ecology from the University of Florida; Bachelor's in Biology from Universidad del Valle, Cali, Colombia.

Throughout much of Latin America, the amount of land in national parks and other government-sponsored protected areas is inadequate for conserving wildlife, particularly in megadiverse tropical countries. Consequently, private protected areas are being implemented as an innovative and widespread solution to address this problem by taking advantage of the growing interest of rural communities and individual landowners to get involved in conservation.  In Colombia alone more than 2000 private reserves have been created.  The number of private reserves is increasing rapidly because development of private protected areas is a major conservation strategy of local and regional NGOs, and local communities are welcoming the opportunity to participate in these conservation initiatives, often in exchange for technical assistance with their small-scale farm operations.  However, across Latin America, almost no information is available on how well private protected areas conserve wildlife, what attributes of reserves make them more or less successful, and what types of species might be best conserved in private protected areas. Conservation NGOs need this information for planning effective networks of reserves, and local landowners and communities are interested in understanding their contributions to conservation.  Juliana’s Ph.D. research addressed these knowledge gaps, particularly focusing on medium to large mammals and large birds in the Andes. She is also examined the communities of medium to large mammals and ground birds in shade grown coffee plantations, which forms the agricultural matrix surrounding many private reserves.  Her work supports regional conservation efforts in the Andes of southwestern Colombia. This region is a global biodiversity hotspot with numerous endemic birds and mammals that are endangered or potentially vulnerable to extinction.  Juliana completed her MS degree at the University of Florida where she worked on the effect of climate change on endemic reptiles in Mexico. While at UF, she was supported by a Fulbright Scholarship, the Colombian government, and the School of Natural Resources and Environment, Department of Wildlife Ecology and Conservation, and the Biodiversity Institute at University of Florida. 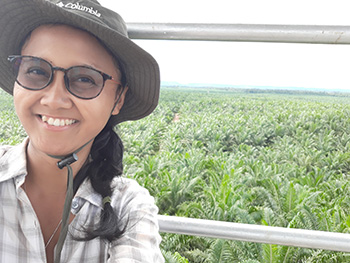 The palm oil industry has expanded rapidly in tropical regions in recent years in response to a high global demand for vegetable oil to meet the needs of the world’s growing population. Because Indonesia is a major palm oil producer, its great biodiversity and native forests are highly vulnerable to land clearing for palm oil expansion. In order to reduce the adverse environmental effects of palm oil production, the Roundtable on Sustainable Palm Oil (RSPO) was established in 2004 with the goal of supporting the growth of sustainable palm oil and encouraging wildlife-friendly agricultural practices. One way to increase the sustainability of palm oil cultivation is through the designation of High Conservation Value and High Carbon Stock forest patches which are forest fragments set aside for conservation within plantations. For her Master's thesis, Prescillia assessed mammalian diversity in these conservation-designated forest patches and in palm oil plantations in West Kalimantan, Indonesia, as well as what factors influence mammal occupancy in these human-modified landscapes. Prior to coming to University of Florida, Prescillia worked at the Research Center for Climate Change at the University of Indonesia, where she also obtained her Bachelor's degree. Her undergraduate thesis project focused on the Javan slow loris' (Nycticebus javanicus) daily activity patterns and habitat use in human-dominated habitat in Garut, West Java. She was supported by the Center for International Forestry Research (CIFOR) and the US Agency for International Development (USAID) fellowship for her Master’s degree. 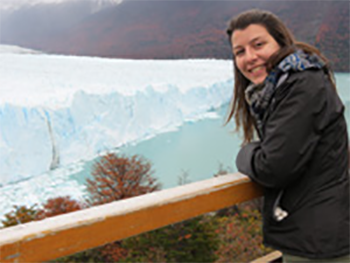 Master’s  student (graduated). School of Natural Resources and the Environment-University, Department of Wildlife Ecology and Conservation.
Thesis: Response of pumas (Puma concolor) to the migration of their primary prey in Patagonia

Laura studied pumas in La Payunia Reserve of northern Patagonia, Argentina, which is the site of the longest known terrestrial migration of wildlife in South America -- migration of guanacos, a wild relative of the lama. Using camera traps, she evaluated the relative abundance of pumas in winter and summer range of guanacos in La Payunia Reserve, and changes in this abundance with guanaco migration. In addition, she analyzed puma scats to assess changes in consumption of native prey and livestock with guanaco migration. At the same time, cameras allowed her to obtain data on relative abundance of smaller cats (e.g., Andean cat, pampas cat, and Geoffroy’s cat), which are poorly known and, in the case of Andean cat, highly endangered. Outcomes of this study provided a foundation for understanding linkages between migration of guanacos and livestock-puma conflict and informed programs of Wildlife Conservation Society that are attempting to mitigate these conflicts.  Also, her research contributed to broad scale efforts to determine the distribution of the endangered Andean cat and informed a broad range of stakeholders about the ecological processes, threats, and potential solutions that are critical to maintaining the integrity of the Patagonian landscape.

Mauricio is interested in combining quantitative approaches from the field of landscape ecology with economic tools to better understand how human activities, such as deforestation, affect biodiversity. His long-term goal is promote biodiversity conservation and maintenance of ecosystem services in the context of sustainable economic development of tropical and subtropical regions. He plans to accomplish this through research and leading conservation-related efforts that affect policy, bridging the gap between decision makers and science, helping build a stronger community of conservation scientists and practitioners, and engaging society in conservation. His current projects include leading a multidisciplinary team in the development of a conceptual model for socio-ecological systems in the Chaco ecoregion of Argentina and assessment of approaches for combining biodiversity conservation and cattle ranching in silvopasture practices in native forests of Argentina.