SCCL alumnus, Alejandro Pietrek, has recently initiated research on the effects of climate change on birds of the high Andean lakes of northern Argentina. 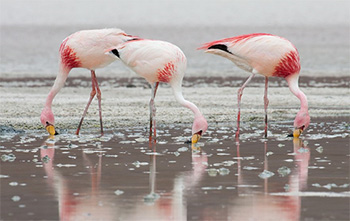 These high Andean lakes are critical habitat for species such as the puna flamingo (Phoenicoparrus jamesi), the horned coot (Fulica cornuta), and the giant coot (Fulica gigantea).

With this grant, Clara will travel to Ushuaia in Tierra del Fuego to study effects of urban expansion on provision of ecosystem services in Patagonian forest and to assess perceptions of planners and technicians involved in implementation of the National Forestry Law of Argentina, which aims to conserve native forests.  She expects to contribute to improvement of native forest conservation and land use planning policies in this region, including both ecosystem and human dimensions. Read more about Clara and her project on the National Geographic Explorer’s website.

Tania is a postdoctoral researcher in the Department of Geology of the University of Chile in Santiago, Chile, where she studies the influence of glacial cycles on transfer of sediments from the Andes to the Pacific Ocean. This work supports global efforts to understand the response of glaciers and terrestrial and marine ecosystems to climate change.

Mauricio and Alejandro have been awarded career research positions in the Instituto de Bio y Geociencias (Institute of Bio and Geosciences, IBIGEO), National Scientific and Technical Research Council (CONICET), National University of Salta, Argentina. Mauricio’s research aims to develop models for sustainable land use and biodiversity conservation the Chaco region of northern Argentina.  As a result of agricultural expansion, this region has one of the highest deforestation rates in the world. Alejandro is studying the impacts of climate change on bird populations in the high Andes of Argentina.  Many of these species nest in Andean lakes that are threatened by climate change and anthropogenic factors such as mining.  Before joining CONICET, Alejandro conducted research on problems related to North American beavers introduced to forests and wetlands in Tierra del Fuego Argentina (See link for more information: https://phys.org/news/2015-12-good-invasive-beavers-patagonia.html) 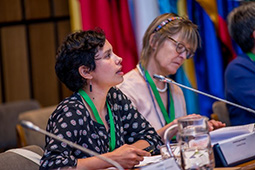 After 3 workshops developed in Gainesville (Florida, USA), Quito (Ecuador) and Puerto Iguazú (Argentina), the organizing team of the workshops "Women in Environmental Sciences and Sustainability: Opportunities and Challenges in Latin America" was invited to participate in a round table at the 12th Gender Summit (and the first in Latin America) on Science Technology and Innovation, organized by the National Commission of Science and Technology of Chile (CONICYT)in Santiago, Chile on December 2017.

The conference was held in the ECLAC offices in Santiago, where Antonieta Eguren (left in photograph above), representing the Southern Cone Conservation Leadership Initiative of the TCD program of the University of Florida, presented results from the workshops with an experiential vision of the challenges faced by women who work in environmental sciences, opportunities and strategies for facing these challenges. Accompanying this round table were also the speakers: Sally Bunning, Senior Agricultural, Land and Water Systems Officer of the FAO (Office for Latin America and the Caribbean), Laura Gallardo, of the Center for Climate Science and Resilience (Chile), and Eduardo Bianchi, IANAS - Food Security (Argentina). 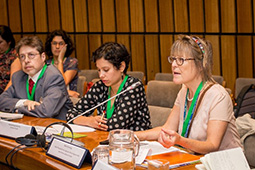 Some of the topics discussed were the importance of the integration of women and their perspectives and experiences regarding environmental issues in order to cover more comprehensive solutions to complex problems such as climate change. Likewise, the need to change paradigms towards new life styles aimed at greater equity between women and men was addressed. The roundtable and its presentations were broadcast by streaming.

Ignacio Rodriguez Jorquera, SCCL alumnus and member of the Southern Cone Working Group, helped lead the course "Nuevas Tecnologías Aplicadas a estudios ecotoxicológicos en animals silvestres” (New technologies applied to ecotoxicological studies in wildlife), held at the Veterinarian School of Universidad Nacional del Litoral de Santa Fe, Argentina. Collaborative teaching is one of the activities of members of the Southern Cone Working Group (a Southern Cone-based group initiated with SCCL) aimed at generating South-South working collaborations to improve wildlife conservation in the Southern Cone. Moreover, because ecotoxicology and effects of pollutants on wildlife often are not considered in traditional wildlife conservation in Latin America, Ignacio is leading incorporation of these problems in conservation agendas and research programs. This work included participation in the 2015 Symposium " Pollution in Latin American Protected Areas: Challenges and Opportunities in Protecting Biodiversity and Ecosystems” held in Buenos Aires in the Latin-American SETAC (Society of Environmental Toxicology and Chemistry) congress leading to the 2016 publication of the paper "Latin American Protected Areas: Protected from Chemical Pollution?” (IEAM 2016).

Cristina Nuñez-Godoy and Marcela Marquez, with the support of the Tropical Conservation and Development Program (TCD), organized and led the 2nd and 3rd workshops in a series entitled "Women Scholars in Environmental Sciences and Sustainability: Opportunities and Challenges in Latin America” in Quito, Ecuador (August 7th) and Puerto Iguazú, Argentina (September 17th), respectively. SCCL alumni, Antonieta Eugren Ibacache and Viviana Rojas Bonzi, also helped plan and facilitate the workshops. Women from across Latin America participated, enthusiastically sharing their experiences and ideas regarding gender-related issues faced by women working in sustainability and environmental sciences in Latin America. The workshops preceded the XII International Congress on Wildlife Management in Latin America held in Ecuador, and the VI Binational Meeting of Ecology of Argentina and Chile, held in Argentina. 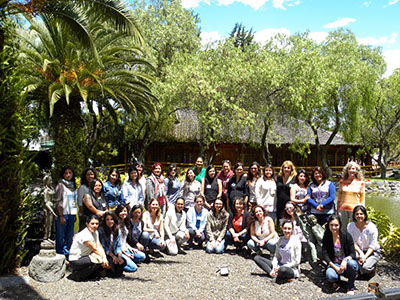 Southern Cone graduate students Felipe Hernández, Maria Laura Gelin, Cristina Nuñez-Godoy and Claudio Moraga, and SCCL alumni Mauricio Nuñez-Regueiro and Viviana Rojas organized and led a roundtable discussion "Challenges and solutions to connect science and practice for the conservation of the Southern Cone of South America” at the VI Binational Meeting of Ecology of Argentina and Chile in September 2016. The roundtable gathered more than 150 participants including scientists, government agency personnel, conservation practitioners and students who identified challenges and solutions to overcome the science-practice gap both at local and regional levels.